Al-Ibaanah is accepting registration for our Women’s Online Arabic Program.  We have a limited number of spaces available in the classes beginning on June 1, 2014. 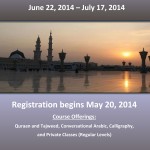 Registration for the Ramadan Workshops begin on May 20, 2014

Our course offerings are:

Private Classes in our Regular Program

In general, the situation in Egypt has very much improved since the previous political turmoil.  For the most part, both Egyptians and non-Egyptians go about life as normal in Cairo.  The people go to the masjid, work, school, and daily errands without problem.  Our students move about freely, coming
Continue Reading

... to assist in preserving and spreading understanding of the Classical Arabic Language in its purity and beauty.


Warning: sizeof(): Parameter must be an array or an object that implements Countable in /homepages/16/d518026684/htdocs/Ibaanah/wp-content/plugins/sidebar-login/includes/class-sidebar-login-widget.php on line 213